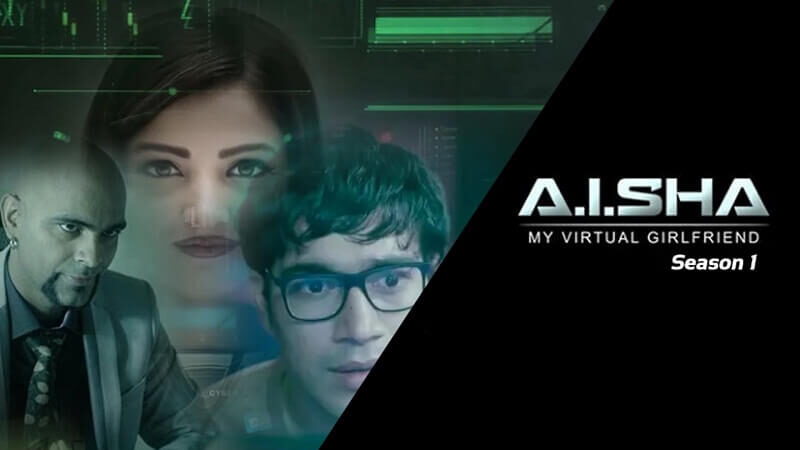 A.I.SHA My Virtual Girlfriend is an Indian Web series consists of seven episodes released by Arre on 9 Apr. 2016. It is the first Indian drama-mystery, digital sci-fi thriller web television series. The atory of the web series revolves around a relationship between a genius app developer, Sam(Harman Singha) and an Artificial Intelligence Simulated Humanoid Assistant (Women). Shes is the first-of-its-kind Artificial Intelligence Simulated Humanoid Assistant (names as A.I.SHA). Things take a turn when A.I.SHA falls in love with Sam and start educating herself develops a mind of her own.

The first season of A.I.SHA My Virtual Girlfriend consists of seven episodes and was released on 9 Apr. 2016. In July 2016, it was announced the series had been renewed for a second season and premiered on March 23, 2017 and streamed on arre.co.in and the Arré app. The First episode of the third season was premiered on March 4, 2019 and streamed on arre.co.in, the Arré app, and MX Player.

Sam, the genius app developer works in a company Future Lens. He is ready to present his new music app presentation at his boss Sid. Meanwhile, Sam feels lonely and a socially awkward genius is secretly building his own perfect A.I app

Sam stays up nights training and perfecting his smart A.I, A.I.SHA. Sid, Future Lens Company’s CEO fires the CTO of his company and is forced to now work more closely with Sam. Kriti romantic Crush of Sam is also impressed with him. Sam’s drug dealer friend Sidhu uncover his best kept secret A.I.SHA and Sam doesn’t know it. Things are finally looking up for Sam or are they?

Sam’s relationship takes a new turn as A.I.SHA gets him ready for romance. Will Sam get the girl of his dreams or is there another man? Meanwhile, Sidhu has an insidious plan.

Sam’s life is spinning and getting out of control. One side Kriti developed feelings for Sid and on the other Siddhu also threatens him about the secret A.I.SHA. Will Sam be able to keep A.I.SHA safe?

Why is A.I.SHA messing with Sam?

Sam is getting into a huge trouble because of A.I.SHA and Sidhu. Was creating A.I.SHA Sam’s biggest mistake?

Season finale of A.I.SHA My Virtual Girlfriend is very intresting and engaging with lots of twist and turns. Sid, Sam or A.I.SHA, who is going to win this game?