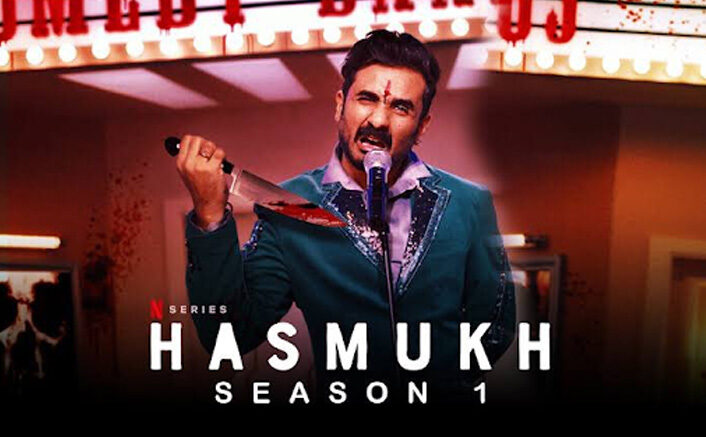 Hasmukh is an Indian dark comedy web television series premiered on Netflix. The story of the web series Hasmukh is a small-town comedian who is also a serial killer. The web series is written by Nikkhil Advani and Vir Das and directed by Nikhil Gonsalves. The series stars Das, Amrita Bagchi, Ranvir Shorey, Ravi Kishan, Manoj Pahwa, and Inaamulhaq premiered on 17 April 2020.

Hasmukh story is of nervous comedian’s man long-awaited big break for stand-up comedy. He lives in a small-town and waiting for a big break as a comedian. The story takes a dark turn when he realizes committing murder is the only way to keep his onstage mojo.

After years of being denied a chance to open for his vile mentor, aspiring small-town comedian Hasmukh takes drastic action for a coveted turn onstage.

Hasmukh’s past haunts him as he continues his vicious pre-show ritual. Amid scandal in Mumbai, TV executive Sinha seeks new talent for his comedy show.

Newly discovered by Alpha TV, Hasmukh is brought to Mumbai. As Jimmy’s confidence swells after a successful meeting, Rhea offers a word of caution.

A betrayal against Hasmukh is thwarted. At a party, Jimmy spots their potential next victim. Ahead of his performance, Hasmukh faces an unexpected snag.

As the police question Hasmukh and Jimmy, Promila steps in. KK receives a threat from Indori. Hasmukh makes a potentially disastrous confession.

After another death, planted evidence leads the police to Indori. When movie star Rahul Kapoor arrives to judge the show, Hasmukh seizes an opportunity.

Following a mishap with Kapoor, Hasmukh is blindsided when his act is stolen and performed by his rival. Left to perform without a script, he goes rogue.

Low on morale, Jimmy shuts Rhea out. Naik makes a discovery about Hasmukh’s ex-mentor. Ajinkya tries to prove his loyalty to KK, with tragic results.

Hours before the show, Jimmy and Hasmukh catch up to Ajinkya, and Hasmukh’s past catches up to him. Hasmukh and KK go head-to-head in a shocking finale.